Studs Terkel So a man because man is considered a thing to consume, thus we have planned obsolescence. The car of last year is no longer good this year. And so man is like, you know, the Strasbourg goose the geese of Strasbourg. You know, a funnel is put in their mouths and they're stuffed and stuffed and stuffed with food until they die. The liver expands this becomes pate de foie gras. So man is like the Strasburg goose in a way is he not?

Studs Terkel It's funneled in again what's the purpose? Who is man? I mean this goes back to man as against the thing we come back to this again. You spoke of a new literature and you mentioned several of the books of one reviewed just as Panorama last week carried the literary supplement of The Daily News carried an excerpt of your magnificent talk. It got reviewed by by Lauren [Barrets?] of a book by that you mentioned in your talk the Technological Society by Jacques Ellul and he's quite pessimistic about this.

Francis Chase He's very, I've read that recently and he's an interesting writer and he claims not to be entirely pessimistic, but the whole tone of his treatment is pessimistic. And he makes statements that I think are not supported by the evidence that he gives. And actually, he's almost as as pessimistic as Friedrich Junger who wrote on the failure of technology. But all three of these, at least two and and Norbert Weiner himself was concerned with one aspect of our modern technology and that is the enormous rate at which it uses up the raw materials of the universe. This goes faster and faster. We we can now use low-grade ores that we couldn't use before. We're developing synthetics. But nobody knows how long this process can go on, whether we can use up the basic resources of the earth. And most of these people including Weiner feel it's a foolish optimism to feel that we can go on and on using up the iron and the manganese and the magnesium the aluminum. The aluminum is the most nearly inexhaustible, I suppose, of these metals. And the water resources and so on without some care for the future. Now the a lot of people are very much concerned about passing on a burden of debt to the unborn generations. It seems to me we ought to be equally concerned about passing on a deficit of the resources which would make life pleasant and tolerable for those who come after-

Studs Terkel Because as you're saying this, you know, the challenge seems overwhelming. Yet, you don't feel you don't feel as Ellul and Younger feel do you?

Francis Chase No, because I have a kind of old-fashioned even 18th-century faith in the fact that if man can be helped to understand he can exercise some controls. Now, this is is quite old-fashioned, but I think if one looks at man he sees aspirations in all kinds of people, even those whose record of behavior isn't very good. And if we work a little bit harder on how to release these aspirations and give them free play and to change those conditions which make man hostile to his fellow man. In other words, I I think that that human reason can be applied as readily to creating conditions which give free to the playfulness, capriciousness, the reflective aspect of man's nature, as to those aspects of man's nature which are satisfied by material goods.

Studs Terkel I know that Dr. Bronowski shares your feeling. This is this is not so much optimism in the sense as you say old-fashioned optimism that is so greatly needed today, but not so much that as a certain truth that man does. If man can create all this certainly certainly he can create a world that is fit for man.

Francis Chase Now I'm not talking about a utopian condition. I'm not talking about a world that is going to be entirely free from conflict. Fact, if that's all we wanted maybe technology is the way to do it. But this would mean eliminating from man many of his impulses which give him the greatest joy, exhilaration. Somethin' I was readin' yesterday something in the magazine Daedalus about exuberance of these earlier scientists and Bronowski was talking about that. And William James a psychologist talked about the way in which the creative mind throws up thousands of ideas and then selects only a few to work with and the richness of of this. These perhaps come from the subconscious, from previous experience, from all sorts of external stimuli. James thought, and a great many others have thought that this was something that was open only to very few people. This is not clear that is it's not clear that if children had the kind of environment that led them to exercise their imagination to ask the fruitful question to carry on the dialogue with others around them that we might not develop that kind of richness of intellectual life and a great many more people.

Studs Terkel Freeing freeing that just, you used the word exuberance. Joy perhaps too is this. It's the absence of this or the suppression of this which you call you said if caprice might become downright subversive and indeed contemplation might this is connected with exuberance, with joy-

Francis Chase Yes I think- that

Studs Terkel that one senses. As a friend of mine a British director named Joan Littlewood, Dean Chase. She speaks of this is her raison d'etre really. She looks for this in her productions. She looks for it in bars. She perhaps romanticizes but it is she says it's there. It's there if only we can what get our values in one way or another straightened out as to who's more important the man or the thing, I suppose. Dean Chase perhaps one last thing, well there are several, but in in your talk to you, you spoke of a certain cartoon that was funny but that disturbed number of people in which the machine is going. A cartoonist the new computer technology one encounters one encounters terms previously used to note human characteristics the machine: memory, learning, thinking, even feeling. Is that a cartoonist a picture, a computer including among us. Output the phrase cogito ergo sum I think therefore I am. It occurred to me that sum could be pronounced with a short M. Cogito ergo sum. Just so.

Francis Chase If it doesn't, if it can't be handled by binary mathematics, why it isn't any use.

Studs Terkel Well Dean Chase, our guest Dean Francis Chase. Based upon, by the way is this talk of yours available? This is a copy I have. I'm sure, are there, has the university, is the university putting out copies of this, you know. 'Cause I'm sure a great many listeners would probably like to-

Francis Chase It it's it's been suggested it might be published in one of the magazines at the University, but I'm not sure of this. I think it's being considered.

Studs Terkel Well, if if it does ever come out I know there will be questions in the audience. I know that right after this broadcast is your talk available in in in in printed form. We let them know as soon as it is. Dean Chase it is in defense of caprice, and the caprice that Dean's talking about is not I know he says caprice conjoined with order and a discipline, of course. You're not talking now about the artists who were in rebelling [viled?] at all disciplines either that which is called the irresponsible arts. You mentioned that somewhere to caprice for the sake of caprice is just as evil as order for the sake of order.

Francis Chase When it becomes the usual it has lost its usefulness.

Studs Terkel Yes yes yes. Again the service of man. Anything else you'd care to say? Do you just-we haven't any bases we haven't touched that are on your mind at this moment?

Francis Chase Well, the thing that that I'm trying to think through in my own way is the relationship between technology and education and science. And it seems [match striking] to me that we have to fuse in education all of these aspects of culture. The older humanistic culture, which gives man a sense of continuity was a long struggle of mankind. His aspirations and his tragedies, his defeats, and his victories. And with the new scientific modes of inquiry, which has given us a new way of testing ideas and hypotheses and verifying the way that it gives them a wider acceptability than the older ways of knowing. But then we also must help people to understand the nature of this technology so that our system generally may see that human controls are possible and can be inserted for humane ends. And the ways in which this can be worked out, parts of a continuing concern with me. I don't think we have to be the victims of our own technology. I think we can again assert our mastery over it.

Studs Terkel Dean Francis S. Chase former Dean of, isn't that right of the Graduate School of Education of the University of Chicago.

Studs Terkel And this is not a play, it's just a comment, really, for us to understand ourselves our connection with past. We we we are not, we don't live in a vacuum with a history of man and his development for humane ends he said. Perhaps not too far removed from what Erich Fromm once said what is cry-a crying need for today is a renaissance of humanism in a way, the un-do do you subscribe to that?

Francis Chase Yes, yes I do. But I think it must be a humanism that takes full account of the conditions of modern man which, after all, appreciably changed from even 50 years ago.

Studs Terkel So thus, there's a challenge unprecedented really. A man has always had this challenge. A challenge, man is on the threshold of being even more in understanding himself through his progress being even more human than ever possible understanding himself or becoming like the machine. The challenge that Dean Chase asks us to face to look at to think about and I hope to do about. Thank you very much Francis Chase.

Francis Chase Thank you. I enjoyed talking with you. 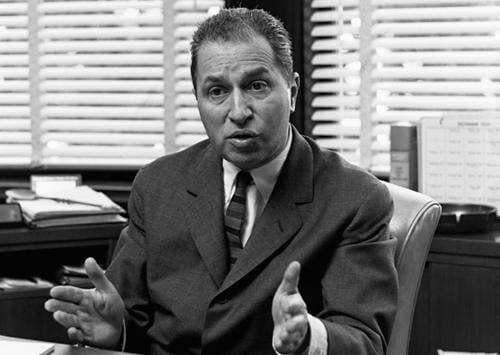 Mortimer J. Adler, American philosopher, educator & author discusses his book "The Difference of Man and the Difference it Makes"

Micheál Mac Liammóir discusses his show "The Importance of Being Oscar"; part 2