Lord Caradon discusses the United Nations and its efforts.

Studs Terkel I would say one of the sunniest voices, certainly one of the most optimistic heard during the Pacem in terris conferences at the Waldorf in New York recently, broadcast over our station was that of Lord Caradon. Lord Caradon is the United Kingdom's representative of United Nations and has spent a good deal of time in the Middle East, too. I mean, what do you attribute this marvelous sunny air that you had that day. I remember that conference.

Studs Terkel As they want to

Lord Caradon Well that may be. I think they they're quite ready to believe it anyhow, and therefore it's well to remember that over 80 percent of the men and the money who are employed by the United Nations are employed on economic development to try and bridge the gap between the poor nations and the rich nations, which at the moment is growing not smaller but larger. So that's one main thing to remember, and therefore it seemed to me important we'd listen to all these historians and the-the-thes-these wise men speaking philosophers, politicians too. But I am a practical man and I have to deal with this day by day and therefore I was a bit worked up when I I heard people talking in superior way about the, our difficulties. Day by day we're doing a job and we are struggling with a job and we need the support of ordinary people. And when you run into trouble, surely the reaction should not be one of defeatism but one of increased determination-

Studs Terkel You know Lord Caradon, y-your humor during that panel. I think the subject of the revolution came up, the revolution of rising expectations of underdeveloped countries and you spoke of the United States vis-à-vis or the rather the British Empire vis-à-vis the colonies, 1776.

Studs Terkel And in a, in a sense you were implying that we ourselves should recognize our past in attitudes toward

Lord Caradon Well, when I when I'm in my own country, I have a bit of trouble unders-- trying to explain how these new nations feel about independence and how they feel about the continuation, for instance, of racial domination in southern Africa. But in this country, I shouldn't have any such trouble because these ideas were fashionable in your country 'round about 1776.

Studs Terkel You said, Lord Caradon, they were fashiona-- you used past tense I noticed.

Lord Caradon No, they were fashionable then in 1776 and I don't see why they shouldn't be fashionable still. But, no so q-quite seriously, I say that we wrestle now with the biggest task which we have undertaken since the United Nations was formed twenty years ago. And we sit 'round the conference table with the Russians and the French and with 30 other nations to see if we can find a a way to go. We're not trying to find all the answers to the problems of the world. But we're trying to establish a better method, a better machinery for peacekeeping in the world in the future. And it annoys me, w-when we engaged on this major effort-- hear people speaking as if the whole organization had failed. We haven't started yet. We are engaged on this work. Yesterday I was sitting in the committee. Yesterday I was able to say, incidentally, that I was glad that the Russians had now decided to talk to the subject under discussion instead of, as they had done previously, raising something which had got nothing to do with the committee we're working, on raising abuse on Vietnam.

Studs Terkel Since you speak of the Russians, rather interesting, there seems to be development, is true or imaginary? That it's no longer the gap between East and West so much as North and South. To use another f-- euphemism for for the rich.

Lord Caradon That's what I believe is the main problem of the world and the main danger of the world and we know about the dangers between East and West. But I would certainly say that the dangers of race between North and South, in Africa for instance, and between the rich nations and the poor nations, and it happens you, see this is what is so terribly dangerous, that the rich and poor correspond with the white and black. And this is getting very serious indeed. If that is-- if you view that on a world basis.

Studs Terkel It seems as though it were almost a caricature, a cartoon, a generation ago, it seems to be a truth today. How then, in the United Nations this matter, quite clearly of the underdeveloped nations or the colour differences, you know, the underdeveloped being non-white and the developed economically being Caucasian.

Lord Caradon Well, I think that the the one of the advantages of the United Nations and one of the reasons why we must maintain it and strengthen it is that we do have in the United Nations a forum where you can come, whatever your color, and speak for your country on a basis of equality. And this is something of enormous value in the world, which we mustn't give up.

Studs Terkel Yes. Because as as an American, I couldn'ta help but be moved, though your comment was humorous at the time, it had bite to it and pungency, I felt. To recall our own history that we were a colony. And you indeed. Now we seem to have forgotten this. I I think-

Lord Caradon President, President Kennedy Kennedy r-reminded us of it often enough and and he used to speak about a revolutionary attitude to the problems of the world. I I I I've I humbly agree with him.

Studs Terkel Yes, I know it's difficult to ask you certain other specific questions involving us, vis-à-vis other nations, but there seems to come to mind a great many Americans these days and I was curious to know how United Nations-- I know this is a difficult question to answer. Us and Vietnam, specifically, quite frankly, I know it's difficult. I realize that. And your government has taken a rather interesting position too, it would seem. How how, well this subject, UN seems quiescent in this matter. That's what disturbs me.

Lord Caradon No, I I don't think so. Where you get great powers involved, the UN has no authority higher than that of the great powers, and this is one of the facts of life, that the UN cannot intervene between great powers and dictate to them, nor would your country wish that they could. The great powers maintain their dominant position in the world. The function of the peacekeeping in the UN, at this stage anyhow, is to make sure that small disputes don't give rise to world conflicts. Suez. Congo. Cyprus. The UN is capable of dealing with these m-m-minor flare ups in a way that-- to prevent them becoming world conflicts. This is important a-and, if they get in early enough, then, I think Governor Stevenson was saying only yesterday that we're increasingly learning, I believe, that an international answer is better than a national one.

Studs Terkel True, but what disturbs us, I think a great many Americans who may be unfashionable in this thought, is that the minor flareups, yes but we think now about major flareups. You speak of the great powers.

Studs Terkel Isn't this a UN

Studs Terkel You do see the UN, though, this is again coming back to your attitude that I know will lift the spirits of a great many listeners, your attitude of optimism and sunniness.

Lord Caradon Well, not optimism. It's just that the determination, I would say, is a better word for it. I'm not-- you've got look at the world these days and be an optimistic. You can look at the world and say "we've got to come out of this and th-the sooner we get our principles straight and get on with it, the better." And I don't believe that when troubles a-a-are all around you, that's the time to give up. I think it's the time when y-y-you you want to try harder.

Studs Terkel I'm reminded of a phrase, Lord Caradon, before I let you go, release you to your next engagement, for one of the panelists at the Pacem in terris con-- I forget who it was, who spoke of the oneness of man being the real-- the political reality of our day. Once, considered utopian, this is the reality-

Studs Terkel Of our

Lord Caradon I think if we look back a decade or two we realize h-how far we've come in quite a short time, i-in that general recognition of that basic fact. Yeah, I think so.

Studs Terkel Lord Caradon, perhaps a last a last comment of yours, a an epilogue. What, I don't know. Anything on your mind we haven't talked about, it was very too brief too brief conversation. What reflection, perhaps, the year 1965?

Lord Caradon Oh no, I don't think I got much more to say except that when you are in trouble you've got to redouble your efforts to get out of it, and we're in a lot of trouble. That doesn't mean to say that we must sit down and give up. It means that we must work harder and work harder together. I believe that's what we intend to do.

Studs Terkel I know a question, it's a personal one. I remember you were the Governor General of the island of Cyprus when I was in London, a great many Cypriots live in London. I was aware of that. To what can that be ascribed? The great number of Cypriots living in London?

Lord Caradon Oh, well th- th- th- we've had a long association with Cyprus. We were governing Cyprus for 70, 80 years. And the-- we have a very close association with the Cypriots. I'm damn proud of the fact that I was governor of Cyprus through a period of rebellion. But when we found a settlement, within a week or two, the British troops were welcome back in the Greek and Turkish cafes. We we we we fought clean. And there was no hard feeling between us.

Studs Terkel The fact that the troops were welcomed back in itself indicative of the feeling of the populaces.

Lord Caradon Yeah, that even-- this is, I think I would be proud of this that o-our troops could fight a rebellion and a lot of bad feeling while it runs. But we fought it clean and when you come out we have a very good relationship. The fact you see so many Cypriots in in England means that we we maintain with Cyprus, even after periods of very strong feeling, good relationship, good personal relationship. This is something important and the other parts of the world where bad bad blood will stay for a very long time. Not not we're-- not in Cyprus.

Studs Terkel Interesting euphemism British Empire. Something something of an obsolete phrase these days, yet it seems that's been an interesting adjustment that's taken place

Lord Caradon Well, there are some benefits and I'm very glad to be able to say that in Chicago.

Discussing the book "Forty Acres and a Goat: A Memoir" with the author Will Campbell

Discussing the book "I've Got the Light of Freedom: The Organizing Tradition and the Mississippi Freedom Struggle" with Professor Charles M. Payne 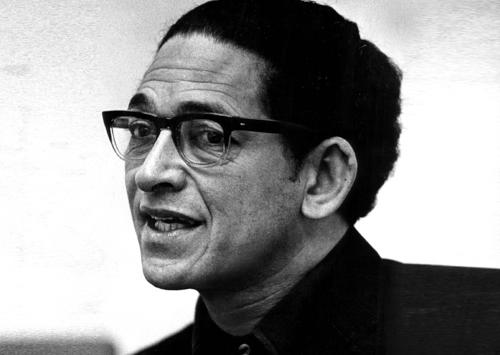 Discussing the book "China In Our Time: The Epic Saga of the People's Republic from the Communist Victory to Tiananmen Square and Beyond" with the author, China specialist and political scientist Ross Terrill