Studs Terkel You know perhaps we could celebrate the occasion of the woman mayor of Freetown [chuckles] and the very, the very history of Freetown being a city for liberated people and here are women also being liberated in this sense. This village celebration, perhaps Gus and the others could perhaps comment about-- after we hear a fragment of this village celebration music. [music playing] Now th-this, this fragment we heard of this music has been described as a Christmas celebration. But you were implying earlier before we went on the air, Gus Stevens, that this could apply to any religion or any

Augustine Stevens Yeah, definitely. It doesn't have to be only for Christmas celebration. As a matter of fact it could be used for any type of celebration. I think that sums this up, the sums the whole thing up.

Dr. Thaddeus Kawalak I think it's interesting to note that the-- what our national religious holidays, Christmas and Easter and, that also the Islamic holidays are national holidays in the country. So in a way, they get double holidays. They have, have the [chuckles] Islamic religious holidays are national holidays in the country and so are the Christian holidays. Because I know when I was there the, the Islamic holiday was celebrated on Friday prior to Easter just as on, on Good Friday

Dr. Thaddeus Kawalak Which we would celebrate, too. And it becomes following-- I suppose the British brought the custom, bringing the Christian religion into the country. So Easter, for example, is a, a four-day holiday fromm through Friday through Monday.

Augustine Stevens I think this is done to, to bring a compromise between the different sects of people because although Christianity is, is the national religion, you, you may have the, the male being a Musl -- Islam, but she is installed in a church. The, the, the, the mosque ca-- the place of worship for the Muslims can carry out their own activities. But then finally you have the, the installation done in the church. And as I said again, this is to, to compromise-- to bring about a compromise as to, to lessen the conflict between the different groups of people.

John Collier The, the prime minister, the present one, Sir Albert Margai, makes it a practice of worshipping in the various houses of worship of

Studs Terkel You know as John or Gus and Anne, I was just thinking and, and Dr. Kawalak here are talking-- it occurs to me that in Sierra Leone, one of the many countries of Africa, there is this multiple culture, this is the effusion of a variety of cultures, isn't

Studs Terkel That makes for a, I think, a tremendous excitement in life.

Dr. Thaddeus Kawalak I, I think this is really the strength of a country just as much as the, the various nationalistic European influences are in the United States are, are the strength of America. And no one nationality or no one religion is overbearing over the other. I think this is going to add to Sierra Leone at which is now about five years as a, as a free nation of its own, and I think this is a tremendous strength added to the people.

Studs Terkel Very casually we've, we've been just talking here over this roundtable about Sierra Leone with John and Anne Collier, two -- for two years Peace Corps worker there, Augustus Stevens who is from Sierra Leone, who has visited various universities here, Dr. Kawalak who is head of the Sierra Leone what-- Peace Corps project at Roosevelt. But I could-- before we hear the voice of a singer apparent-- who is very well-known and who apparently Gus knew and as a small boy. But I think, a number of other problems obviously have faced continuously, as in all countries, particulatly economically and health, I suppose, agriculture. Rice is the prime-- is rice the chief

Studs Terkel Rice is. So and health-

Dr. Thaddeus Kawalak And curried foods which are [laughs] are awfully hot but very delicious.

Studs Terkel Curried foods. Now this would come from what-- I wonder where the influence with this-

John Collier Yeah, this is the, the white community and the upper class-

Studs Terkel What do, what, what does the majority of people eat then? What do the poor-- as Fats Waller used to say, the old jazz man, what are the poor people doing tonight? [laughs] What are they--

Studs Terkel Is that primarily rice?

Anne Collier Yes with a,

Anne Collier A sauce of fish and tomato paste and lots of good hot pepper.

Studs Terkel Perhaps one last question to ask of the Colliers and then ask perhaps Gus about this, his friend, the singer this very well-known figure, Salia Koroma. Koroma, Salia Kor- your thoughts now, you've been back, Sierra Leone, two years in what was a strange land. Go on.

John Collier It's our second home now. [laughs] See we should perhaps say we had just been married before we went overseas. So it was really our first home.

Dr. Thaddeus Kawalak It was really a honeymoon.

John Collier It was our-

John Collier Two years on a tropical paradise. And then we have-- well of course all memories as you go along, as unpleasant things recede, the pleasant ones stand out. And now we have nothing but happy memories of Sierra Leone, and we want to go back to visit very definitely.

Anne Collier And this has definitely influenced, John. He's studying international relations right now and African Studies. And I'm sure that this would not have been uppermost in his mind if we hadn't gone into the Peace Corps.

Dr. Thaddeus Kawalak I think it's interesting we have-- out of the 86 people in our training program, six married couples i-in the training program who are going over, that begin their lives actually, young people. Incidentally, they come from 34 different states in the United States, and it's wonderful to see how well they're are adjusting to each other here in the last five weeks. They'll be together another five weeks before they go overseas. This is an example of the types of people who are coming into teaching, basically, these people'll be all teaching in, in Sierra Leone as well as working in community development work. There are 40 women and 46 men in the program, and they all seem to be adjusting and again getting together a little closer than they would have in the United States.

Studs Terkel Well again this is a point that Gus Stevens brought up earlier. The question of the, of the discovery, you know the breaking of stereotype as to who are Corps people, the same time breaking the stereotype we have of different peoples, particularly Africa. And this is specifically Sierra Leone. Perhaps a thought before we say goodbye now, just a, a thought about the singer Salia Koroma, who I take it who was very well-known. Your, your memories of him, Gus.

Augustine Stevens Well I was about eight years when my father, who happens to be a, a minister of religion for the United Brethren Church, was sent to Bumpeh where Salia Koroma did most of his singing. He was an attendant to the chief, Chief Gbosowah of Bumpeh. And usually when the chief makes trips or when the chief had visitors, this guy was called upon to entertain the chief's guest and of course the chief himself. And later on in life, while we have been playing music of the, the original type of drums and of woods, but now [Casella?] Koroma could be regarded as a modern element in the life of Sierra Leone. I don't want to leave the impression that this particular stage is the, is that stage to which Sierra Leone has got be-because of the use of accordion. But that the use of accordion is only a symbol of modernization in Sierra Leone, and of course there are other musical instruments that are being used. There are record-prod-producing areas of, of Sierra Leone. There are other elements of modernization. But on again we want to stress that we are marching towards modernization, and that probably Salia Koroma will leave this impression on our minds. And probably, if I may throw my last word in, I want to say that I particularly, as a student from abroad studying in United States, I have appreciated being in the United States, and I'm glad that I studied in the United States, and I'm particularly glad that I was able to serve on the Peace Corps staff or still serving on the Peace Corps staff, because it has made me to understand certain aspects of the American life, the American people, and learn to live with them better, you see. And that even if I return home, I don't say "even" I don't mean that, if I-- when I return home, I would know how best to work with these people. And again I say that I thank the United States very much. We have a little saying at home that we may be regarded as people with headache. We have a headache and the United States has all the pills, all the aspirins, and all the Kleenexes [chuckles] so that we are looking forward to America to still keep on providing the Kleenex and the aspirins for us.

Studs Terkel Well and that has helped, too, it helps us get rid of some of our headaches, too.

Dr. Thaddeus Kawalak Incidentally we have-- there are 240 Peace Corps volunteers in Sierra Leone at this time. One thing Gus, it-- you were talking where the singer comes from, Bumpeh, and we previously were talking about wives and the chief of Bumpeh, I understand, has 105 wives. [laughs]

Dr. Thaddeus Kawalak I would say he really needs pills.

Studs Terkel Now there's a headache. Perhaps we could say goodbye now, and we hear Salia Koroma, the celebrated minstrel, in a sense troubadour, of Sierra Leone. And the song and the accordion and with one last-- doctor, Dr. Thaddeus Kawalak who's the acting dean of faculties at Roosevelt, head of the Sierra Leone Peace Corps project there. Augustine Stevens from Sierra Leone who has offered us so much insight and now visiting various campuses here. And John and Anne Collier, two obviously quite vivid, graphic, and fruitful years. How do we say in Krio, since Krio is patois, we say good bye or good luck in Krio.

Studs Terkel So we say Meke so everybody. [chuckles] And here is Kalia Ko-- Salia Koroma and music from Sierra Leone.

Studs Terkel in conversation with members of the Chicago String Quartet 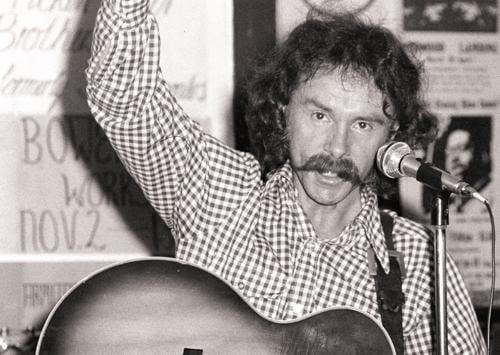 Discussing the book "The Power of Black Music: Interpreting Its History from Africa to the United States" with the author Dr. Samuel Floyd, Jr.