Studs Terkel comments on folk music entertainers Stever Goodman and John Prine. He discusses a little about their life and names a variety of their song titles. The musical performances have been erased from this edited version of the recording. Includes an excerpt from a previous interview with John Prine who speaks about his grandfather and a song he wrote about him.

John Prine Oh, the carpenter. I got to thinking about my grandfather one night. He died when I was, he died when I was maybe eight or nine. I spent a great deal of time with him. And as long as I was sitting around there thinking about him, I thought I better, as bad as my memory's getting, I should sit down and write down the things I really remember about him. And after I started noticing that the third line rhymed with the 17th line, and so I started putting the lines together so they'd rhyme together like a song, and I just wrote down exactly what he, exactly what he did.

Studs Terkel Your grandfather was a carpenter.

John Prine He was a carpenter and every night he wore he wore a suit to dinner because that's just the way he was. He just would wear a suit to dinner, he would come home and shower up and wear a suit to dinner. He didn't ask anybody else to dress up, but he would always dress up for dinner. And my grandmother, she was a schoolteacher down in Bowling Green, Kentucky. She'd once traded in, a salesman came along and she traded him the cow for, she had a Singer sewing machine and she became a seamstress after she didn't stop teaching anymore, you know, and she always called her husband 'Mr. Prine,' instead of his first name.

John Prine And it was just interesting to me. Now, the chorus, a lot of people don't understand, in particular I used to sing at a lot of colleges and I'm sure kids don't understand it. But [unintelligible] was a carpenter, he built houses, stores and banks, chain-smoked Camel cigarettes, and hammered nails in planks, and he was level on the level. Besides being a carpenter, he was an honest man. And he shaved even every door so the doors didn't stick. You know? And he voted for Eisenhower 'cause Lincoln won the war. He was a staunch Republican.

Studs Terkel Well, we come back to this, it's remarkable, the thing about your grandfather who dressed formally, because in "Hard Times," a guy named Doc Hollister tells about his father, during the Depression, no matter what, he'd always be dressed a certain way, formally, see, but he went to work and come back, you know, very dapper. And that's part of it, you remember the formality of it there. That guy was a square shooter, though, your grandfather.

John Prine Right. Right. You know, and he was a staunch Republican and my father, first time he ever voted was for Roosevelt in '32, and when he came home and told his mother and father that he'd voted for Roosevelt, they just about went through the ceiling, you know. And the main reason that they were Republicans is that Kentucky was a neutral state during the war, and they sided with the North, and they were, there was, you know, Lincoln was a Republican. And then so they just carried that right on through to Eisenhower and they voted. Last time he got to vote I believe it was in '52, and then he'd gone out and voted for Eisenhower and I always figured when I asked my dad about the whole political thing, when, you know, because he was a Democrat he, you know, probably, you know, it's they all date back to the Civil War. So I figured in this song I'd say he voted for Eisenhower because Lincoln won the war. So here I am. If the South had won the war, it could have been a different.

Studs Terkel John Prine and Steve Goodman, aside from being gifted, are very, very generous and very openhearted, indeed. This seems to be perhaps a Chicago aspect of the folk writers' and folk singers' circle. They exchange songs and they pay tribute to one another, and very generous indeed, and so an example is Steve Goodman singing the song of a colleague, Mike Smith, always paying him tribute, it's called, "The Dutchman," and it has I suppose you might say has a Jacques Brel quality, though it's definitely Smith and definitely Goodman singing it. Steve Goodman singing a colleague's song, "The Dutchman," and, see, it's very difficult to choose, what, three or four more songs, no doubt tonight at Ravinia John Prine will be probably singing "Sam Stone," I'm sure, as well as "Donald and Lydia," and Steve will of course be singing, I'm sure, "City of New Orleans," it'll be requested if he doesn't sing it. There's "Illegal Smile." That's one of John Prine's songs and this again is his observation. "The Illegal" -- I think no preface needed for this, it just speaks for itself. As you see that illegal smile so pervasive you take a deep whiff of the air and it smells so sweet. And as narcosis is dealt with by John Prine "Escape" and so another form of escape is dealt with by Steve Goodman, "Lookin' for Trouble." By the way, they have a share of that club, the very excellent folk song club on Lincoln Avenue, called Somebody Else's Troubles, it's a very nice place to go to all the time, they and the Holstein brothers and this is "Lookin' for Trouble," Steve Goodman's approach. What's interesting, too, about Steve Goodman and John Prine always when they record or perform surround themselves with musicians whom they respect very much and what comes out, of course, is awfully good music. John Prine has a comment about the six o'clock news, six o'clock news on all the channels, and I guess each of us thinks about it at times, too, how it does not really affect us and the commercials come in there and statistics rather than humans are talked about and Johnny remembers a friend of his childhood, what happened to him. A sudden tragedy and violence and suddenly he is on six o'clock news, but as a statistic rather than as a person who John once knew, and thus, "Six O'Clock News," John Prine's interpretation. Perhaps to end the program, combinations. John and and Steve shift gears very quickly indeed, from a biting comment, a serious comment, to humor, and to joy, to delight, and "Jessie's Jig" is the name of Steve Goodman's new album, by the way, Johnny's new album is called "Common Sense," and both are excellent. And, well, Jessie, named after Steve's little girl, first child. And so "Jessie's Jig" and all the musicians get together and they just have a good time. Alexander Tcherepnin discusses his childhood and career as a composer 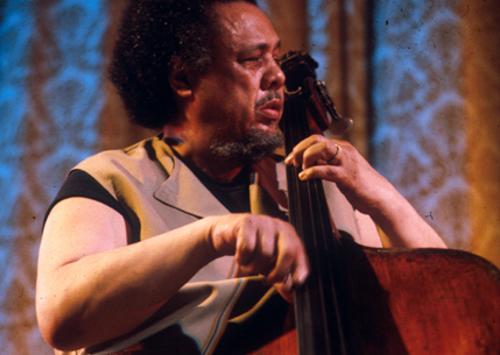 Charles Mingus discusses his book "Beneath The Underdog"