Ian Wallace Degree of informality that you--

Studs Terkel A light November snow is falling outside on the streets of London and I feel very warm inside. And this is my debut I guess in one of the studios of, I was about to say WFMT Chicago. In one of the studios of the BBC. It's, I think it's mixer, I forget the number, studio One-A and this is a most unique building, this broadcasting house on Portland Place and as is BBC as an institution. And the very first interview in the studios here, thanks to the good offices of BBC and [Jack A. Strop?] and Director-General, Mr. Hugh Carleton Green interviewing a rather celebrated bass baritone buffo, Ian Wallace. Some of his recordings are heard in America and we hope more in the future. Mr. Wallace has been connected oh, for about 10 years at least with the Glyndebourne Opera Company and we thought Ian Wallace, we're talking right now. John Christie the founder of this unique musical organization, Glyndebourne, died, was it last year was it?

Ian Wallace It was a great shock to me. I was coming back from giving a performance of a review that I did this spring and summer in London and I was coming home in my car and I had the radio switched on. It was about half past eleven at night and there came this announcement that John Christie had died in the early evening but that at his especial wish the performance that was being given that evening, I think of "Cosi fan tutte," was to continue and indeed the audience were not told anything about the fact that he'd gone. Wasn't to unexpected. He was a very old man and he'd been in failing health for some time. But these things were always a shock even if it's been expected.

Studs Terkel And all the memories that go along with it.

Ian Wallace Indeed. He was a remarkable man. I would go so far as to call him apart from me the founder of Glyndebourne possibly the last of the great English eccentrics because John was a character by any standards. One time I remember he said to me, I was lunching with him and he was bemoaning the fact that as opposed to his youth when England was full of characters, he said, There are no characters left today.

Ian Wallace And I said to him, Well I don't know about that. I said, Characters have always been a bit what they call in the army thin on the ground. And I said, You the character for this particular district so the chances are there isn't another one for about 15 square miles around. And he said, You know I'd never thought of that, he said.

Studs Terkel Now what you're saying, Ian, raises a couple of questions in my mind. One, England and its understanding of the eccentrics [as it?], and Dame Edith Sitwell has written a book called "English Eccentrics" and--

Studs Terkel But that's one--You mentioned the phrase. Now I ask you about John Christie of course, the, as an eccentric. I'm sure incidents come to mind. But you used this phrase just then, "thin on the ground." Would you mind, would you mind explaining the army phrase--

Ian Wallace Well so often maybe it applies more to the British Army than to the United States Army; because we're a smaller country we've so often find ourselves in military situations where there just weren't enough troops to fight the battle. And when when it's like that we say that the troops are thin on the ground. It's got nothing to do with their waistline [laughter].

Studs Terkel But "thin on the ground" [will?] mean not too many a number then?

Ian Wallace Not too many in number.

Studs Terkel In what way was John Christie an eccentric?

Ian Wallace Well he had a very unusual life. In fact one would say that the real purpose of his life, which was Glyndebourne, came comparatively late on. He was a member of the English aristocracy. His uncle was the Earl of Portsmouth and he was to inherit Glyndebourne and which was a country house which has parts of it that go back to Elizabethan times and before with a big estate. There were big family estates also down in Devonshire and it's said that one of the terms of him being able to inherit all this was that he should earn his own living for a period of years. He did this by becoming a schoolmaster first at a great English public school. Of course public school has a different meaning in England from what he does in America.

Studs Terkel That would be private school in America.

Ian Wallace Private school in America. First he was at Marlborough. He taught science by the way. And then he was for some years a master at the famous Eton College. I don't think that his time at Eton was conventional in any sense of the word. They say that he used to teach at early school, half past seven in the morning, in pajamas and a dressing gown and he was he was regarded as a very great character. I have one or two friends who were boys of the time he was a master and they say there was, there was always a great deal of laughter when--

Studs Terkel I suppose they learned too. When you have an eccentric I'm just guessing, someone who's colorful as a teacher it's quite possible that whatever is taught, though it may be taught in some unorthodox way, may be well remembered.

Ian Wallace This I'm certain of. Whoever else they had forgotten at Eton, they certainly didn't forget John Christie.

Studs Terkel How did he come to the idea of Glyndebourne?

Ian Wallace Well he was always interested in in music and in theatricals and he used, before he was married and he was a bachelor, I can't tell you at what age he married but it was, you can work it out, it was at the beginning of the 1930s. He used to have, prior to that, weekend parties at Glyndebourne for people, friends of his to do theatricals, plays, their musical performances in a big room in the house. The theatre at this time was not built. The family was connected with an organ business and there is in Glyndbourne the Organ Room. This was created because the family business had made an enormous church organ I believe for a cathedral in South Africa. Some hitch occurred about the delivery of this organ, whether the people couldn't pay for it or what I don't know. But he decided to have it installed in Glyndebourne in the Organ Room as it was then called, and it was such a powerful organ that certain of the bigger pipes although they were put in had to be stopped up so that they couldn't be played because the vibrations would have been such--

Ian Wallace That the house would have fallen down. And he used to get friends to come and give organ recitals to his house parties. And there's a little eccentricity comes in here because it used to irritate him that his friends after dinner listening to the organ fidgeted a bit and he decided that this was not the way to listen to music and he found in an attic in the house some old hip baths. And he had--

Studs Terkel Some what where they?

Ian Wallace Hip baths. Old fashioned tin baths that people used to use before the days of civilized plumbing.

Ian Wallace Hip baths, yes. And he had these brought down to the Organ Room and filled with soft cushions and his guests were compelled to lie in these baths. They were quite comfortable with these cushions but it was impossible then for them to fidget [Studs laughs], they just had to stay there until the recital was over. The great moment in his life that that brought about the change towards becoming a great founder of an opera was one weekend at the beginning of the 1930s when some people came down to give a performance, an operatic performance I believe, from a dramatic college known as the Webber Douglas School of Acting [sic] and one of the singers who came from this was a Miss Audrey Mildmay, a very beautiful and attractive woman and a very good soprano and it was love at first sight. And Mr. Christie who had always--As a bachelor he was very concerned about marriage, he'd--Even when he was at Eton they say he was always in search of the ideal wife. He used to get hold I understand of some of the wives of the older Eton masters to arrange evenings where all the eligible young ladies of the district, daughters of other masters were invited to a meal, and--

Studs Terkel He was looking for the flower.

Ian Wallace He was looking yes, and one of the things he did apparently, he had a whole lot of knitting in a drawer in his room at his house at Eton and after dinner he used to hand out this knitting.

Studs Terkel He would test them? This was the test [laughs].

Ian Wallace Yes, this was the test, you see. Well obviously none of them passed it [Studs laughs]. I suppose they, I suppose you can't, no girl could--

Studs Terkel I wonder if he had any culinary tests too. Did he have that too? [Unintelligible] recipes--

Ian Wallace Not so far as I know where. I suppose when you are handed somebody else's knitting, you're not really interested. Anyway that didn't didn't work out. But when Audrey Mildmay came down this, this was it. And here was a man who wanted perfection. You and I both know a great many people never get married because they're looking for something that doesn't exist. Well he waited and he found perfection because Audrey Christie was one of the greatest ladies that I've ever had the privilege to meet in my life. He married her and he had this idea that he would like to build a theatre in the grounds of Glyndebourne. Not at this time I think with any idea of forming such a wonderful operatic system, organization, but merely for the the purpose of amusing his friends at the weekends and so on. Well Audrey was an extremely practical person and she said, Look John if you're going to build an opera house there is no point in doing it unless it's going to be the best opera house of its kind in the world and that is much too expensive so we're not going to do it. 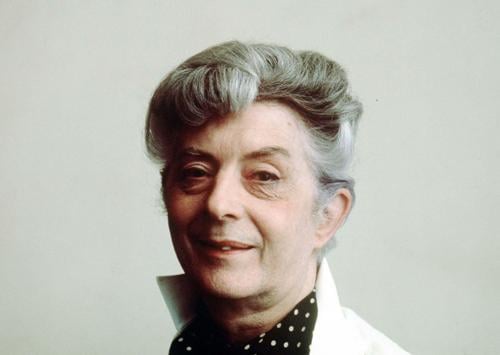